Stuart Pearce Shares How To Take The Perfect Yacht Photo

We see innumerable amounts of Superyacht snaps on a daily basis here at Superyacht Content. Speaking honestly, this sometimes makes it easy to forget about how much work goes on behind the lens. We thought that, as we spend so much of our time sharing these images, we owe our readers some sort of inside scoop! We had a chat with Stuart Pearce, owner of Yacht Shot, to find out more about how to take the perfect yacht photo. 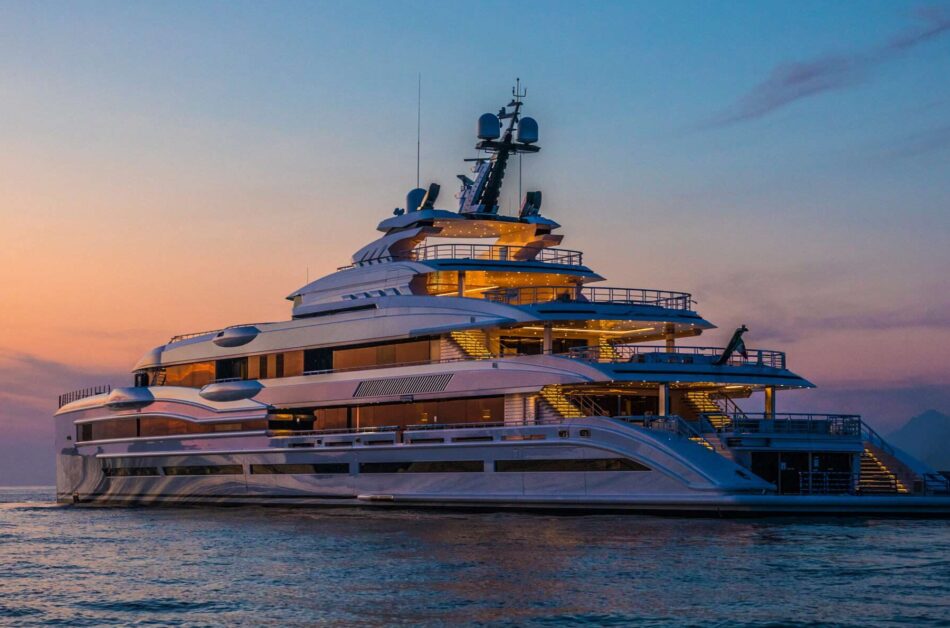 Composition and angle are key

“Ask any photographer, and they’ll tell you that composition is a big one,” says Stuart, matter-of-fact-ly. “It’s all about getting the right angle, which can take time as it’s not always necessarily obvious. Normally you end up finding the perfect angle when you’re there on a shoot- and no amount of planning or research can prepare you for the conditions on the day. I normally would go around the boat a few times and then decide which angles are going to look best, daylight permitting of course.”

And what about those striking aerial images taken from a helicopter? We thought they’d be a must-have for every photoshoot, but Stuart tells us otherwise.

‘’It always bewilders me that some yacht owners don’t want to pay for a helicopter!” he says, “I don’t know if it’s the brokers or the owners who pay for it… It seems a given that you’d want to shoot [the yacht] from a helicopter. But, if they don’t have the budget, then I’ll usually try and get a birds-eye from a cliff if I can.”

“Every boat has an angle that it looks best at, and it’s always different. Loads of yachts’ exterior profiles divide opinion across the industry, and worldwide, based purely on the photos released by the yachting media. I think that S/Y “A” will have a lot of people commenting on the photos. I really would love to shoot her!”

Crew are key to making any photoshoot a success, as they play an active role in setting up the shots, preparing the boat, and sometimes even starring in the images! Stuart tells us that it’s usually a question of timing…

“I often prefer to take the photos post shipyard period, when the captain and crew are fresh and ready for the new season. You need to catch them when they’re up for it and well-rested. I like getting to know them and having fun with them, that way we get the job done really well. The crew is the most important factor, followed by the weather.”

Blame it on the Weather

Weather is, of course, a huge factor when it comes to yacht photography, especially as Stuart spends a lot of his time shooting from a tender.

“If there’s too much wind, you can’t go out of course. Then there’s light to think about, and a good sunny day is every photographer’s dream. You can always edit photos, but natural lighting is very valuable- a grey day can sometimes even spell the end of a photoshoot before it’s begun!”.

So how do you keep stable when snapping yacht shots from a rocking tender?

“If you were shooting video, you would need a stabiliser, but with straight photography, this isn’t necessary as you’re shooting with super-fast [shutter] speeds. Framing an image is more difficult when you’re bobbing around, though- you’ve got to make sure you’re not cutting the top of the mast off!”

Having a solid plan ready with the crew and getting the timing right is crucial for ensuring you leave with that perfect shot. “Normally the crew has to help me just before sunrise and just before sunset. I don’t usually work past that because as soon as it’s dark there’s not a lot you can do.”

Even the most novice of photographers know how big a role good lighting can play in getting the mood and pictures right. Sunrise is one of the best times to shoot, as the light is quite special as the sun is rising. “I know some photographers who get the crew up at 4 am,” Stuart says, “though I’ve never done that, I do try to maximise the time spent onboard with natural sunlight coming into the cabins and other spaces that I photograph, but if you start too early then it can be quite tough on the crew. That being said, dawn is a great time to show off the bright colours of the interior fabrics, for example!”

Stuart also mentions that “more detailed areas such as the guest cabins and the engine rooms and a lot of the exterior look better in the bright but contrasting midday sun.” In this respect, having a timetable for which interior shots you’re planning on getting at different points of the day (and angles of the sun) is a good idea.

Stuart explains that location is what takes a yacht photo from good, to outstanding. “I would love to go up to the Arctic to shoot a new build sailing up the North West passage. The location is important to give that spirit of adventure to the shots, especially when you’re shooting for charter brochures. A tropical background really helps too; the more exotic, the better. Of course, if the goal of the photo is to just sell that yacht, then the location isn’t so important. here I would favour more detailed interior shots and scenes which show off the yachts most desirable facilities.’’

When it comes to shooting in other, less exotic locations, a little research is necessary. “I normally would research the wind and have a look at a map to try and find an attractive bay, or something like that. At home in Mallorca, some captains will take me down to Es Trenc. It’s good to get out of the bay of Palma sometimes: and you need to choose the best possible location given the conditions on the day.”

Many successful photoshoots work on telling a story for the boat, so that people might relate to an anecdotal set of images depicting the experience onboard, rather than just focussing on the yacht’s look.“I haven’t shot a family charter boat yet, and I would love to tell that story of them arriving, dinner time, a cinema scene etc…” says Stuart. “You can do some really cool things if you have the right conditions and crew available; having pictures of dinner ashore with the yacht in the background, for example. I took a picture the other day with two girls walking out of the sea with the yacht at anchor in the background, that was great.”

“Normally you would get professional models in who would bring their own wardrobe. This is great for the end product and cultivating an easy photoshoot. When it doesn’t work so well is when you just have friends of friends to come and do it- they don’t have the experience or the wardrobe (well, some of them don’t…)! You get what you pay for, I guess.”

Challenging stereotypes in yacht marketing is a hot topic at the moment. We’ve all seen the classic photo of the older man with the young, beautiful girl, supposedly representing the archetypal yacht guests. Stuart agrees that this kind of shot can look a little ridiculous, and prefers shooting authentic, old-fashioned fun.

“I once was shooting a family in Formentera. They were just jumping around, making everything wet… There was no pseudo-ing about it, they were just having fun. You can do posing, but you have to make it look natural. There was a series of pictures I shot where we had just the one girl in every single shot… I mean, who goes on a charter on their own?! You need to make sure the series of images represent the real thing, and having a good group of professional models on the day is the best way to do this.”

And then there is the equipment, the tools of the trade, and the magic behind learning how to take the perfect yacht photo. Many people might need to re-mortgage their houses to get their hands on some of the most up-to-date equipment. Stuart says he’s currently using the Canon 5D Mark 4 camera, and that he’s currently working on investing in some underwater camera cases. “But they cost £4-£5k! And every time they update the camera, the case has to be replaced too. I’m a fan of Jeff Brown’s (Breed Media) half in, half out the water shots- they look cool.”

When turning up at a shoot, Stuart tends to pack “six to seven lenses, and a backup camera body. Oh, and tons of batteries, filters, tripods, and stands for the little flashes.”

Well, I would say that the location of the yacht is the most important, but this is often not possible as they need the photo NOW. If it’s in La Ciotat, it’s La Ciotat, if it’s in Bora Bora then wow! I’d mainly advise photographers to plan in advance and invest once in a quality camera kit- as you won’t regret it when you get back home to start editing..”

In the following article, Stuart Pearce discusses Superyacht Photography with us – Click here to learn more