S/Y Maltese Falcon was delivered in 2006 by Perini Navi. Despite being 15 years old now she is still “one of a kind” and causes a stir wherever she goes.

A bit of history

S/Y Maltese Falcon is the brain child of original owner and super keen yachtsman, Tom Perkins. He discovered the hull (originally built in 1990) in 2001. The original idea for the yacht was for her to be square rigged, a 19th Century concept. However, after hiring Dykstra naval architects to look into this further it was decided that the Dynarig concept would be more suitable. This was developed by Dykstra, Insensys, and Perini Navi based on a 1960’s design by Wilhelm Proiss. And so, S/Y Maltese Falcon was born.

S/Y Maltese Falcon measures in the the following statistics;

Because she is clearly something a bit special, S/Y Maltese Falcon has won a huge number of awards. These include

Despite her age, Maltese Falcon is a stunning yacht. She is still considered to be innovative. Add to that her amazing free standing Dyna Rig or “falcon Rig” and sailing performance which is stunning for a yacht this size. Reputed to have cost over $150m USD to build and charters for $480,000 per week. A bargain compared with M/Y Flying Fox at €3,500,000 per week.

She is a rare find in the Superyacht industry. A large Sailing yacht that actually performs well under sail. With her sleek likes, amazing rig, award winning interior, and cool features we rate her as one of our favourites. 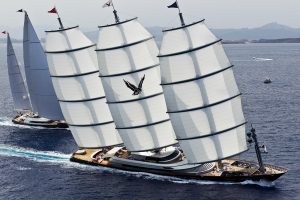 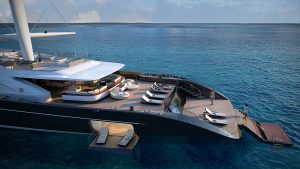 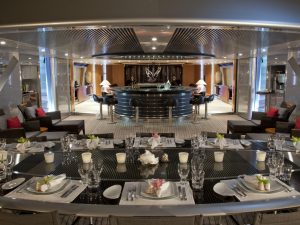