‘Here Comes the Sun’ and other superyacht names inspired by music

Today saw the departure of Winch-designed yacht HERE COMES THE SUN from the Amels shipyard in Holland. This beautiful new build 83m superyacht was commissioned for a repeat owner, whose old boat was named IMAGINE. It’s quite evident from these iconic names that the client is a big fan of The Beatles…so we thought we’d investigate which other famous yachts have names which could be inspired by music (some more than others, read on).

So, yacht HERE COMES THE SUN is one of Amels’ largest ever launches, which features an interior and exterior by Tim Heywood. She has a unique profile and a gorgeous paint job, so it’s a thumbs-up from us on the yacht front for sure.

George Harrison wrote the seminal Beatles song Here Comes the Sun for release on 1969 album Abbey Road. Its lyrics are said to be representative of a difficult time in Harrison’s life, when he was struggling with marijuana addiction and the pressures of being a superstar. he described the song in his own words, referencing their management company Apple Records:

“Here Comes the Sun” was written at the time when Apple was getting like school, where we had to go and be businessmen: ‘Sign this’ and ‘sign that.’ Anyway, it seems as if winter in England goes on forever, by the time spring comes you really deserve it. So one day I decided I was going to sack off Apple and I went over to Eric Clapton’s house. The relief of not having to go see all those dopey accountants was wonderful, and I walked around the garden with one of Eric’s acoustic guitars and wrote “Here Comes the Sun”.” 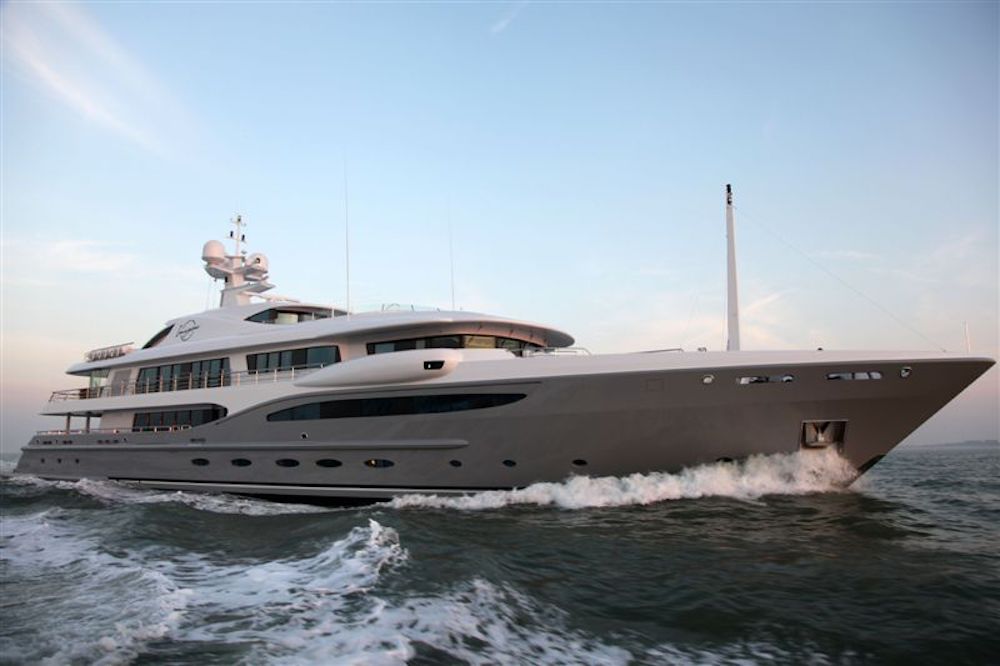 As you already know, this yacht was previously owned by the same family as HERE COMES THE SUN. Imagine made her name as a seriously successful charter boat during her time under that name. She’s now known as INFINITE SHADES and is part of the massive KOGO fleet.

The song Imagine is undoubtedly one of John Lennon’s most famous creations. It’s both beautiful and political, challenging the listener to picture a world of peace with no barriers of borders or divisions created by religion and nationality. Lennon wanted us to consider the possibility that humanity should focus on living a life unattached to material possessions… So what better reason to name your yacht after the song?!

Donald Starkey was responsible for the interior on this 2005 Feadship, which is becoming a classic in our time. Her leisure and entertaining facilities are particularly impressive according to Yacht Charter Fleet, and include a superyacht gym amongst other amenities.

We’ve all heard of Elvis, and although he didn’t actually write Blue Moon his version of the song is by far the most played in history. The song itself is a pop-jazz standard and has been in existence since 1934 when it was written by Richard Rogers. Other famous musicians to record the number include crooners Al Bowlly and Rod Stewart. 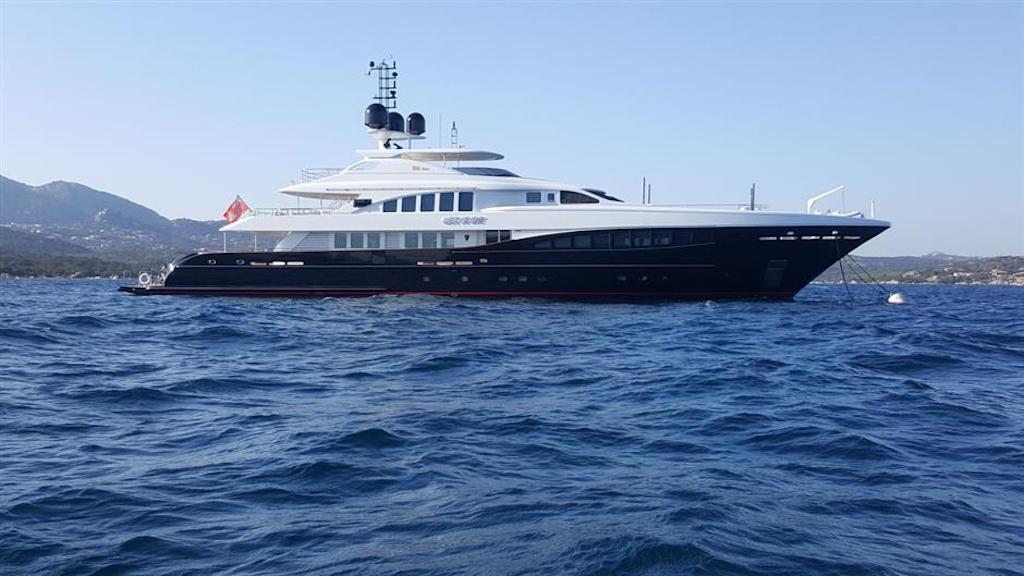 Don’t you all love Heesen superyachts? They just look so fast and sporty- and give you the sensation of being a modern yacht owner looking to the future. LET IT BE, a 2007 launch, is currently for sale with G-Yachts and will surely attract a buyer given the massive collection of toys she carries onboard for a yacht of her size.

Paul McCartney was responsible for the writing of Let it Be, and says the idea came to him after having a dream about his mother. Most people mistakenly assume he’s referring to the Virgin mary from the bible; though. He was recorded saying: “It was great to visit with her again. I felt very blessed to have that dream. So that got me writing ‘Let It Be’.”

This amazing yacht was launched by Feadship on valentines day 2015, fitting for a yacht named KISS you’ll agree. The yacht is highly advanced and a true custom-Feadship in that respect- which demonstrates the Dutch yard’s ongoing commitment to building superyachts within all size ranges. Kiss is currently for sale with Y.CO

The late musician Prince recorded Kiss in 1986, with a heavy blues influence forming much of the track’s catchy rhythm. It’s a pretty amazing song: NME magazine ranked it number 4 in their list of top 250 tracks of all time! Listen to it. Then buy a Feadship. 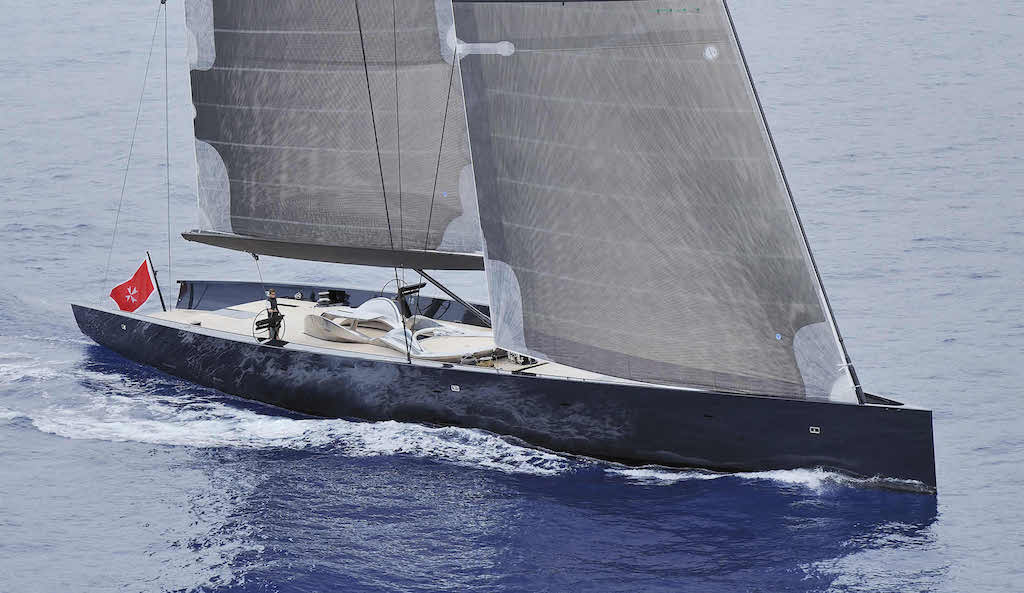 Ok, so it’s getting pretty tenuous now; I usually start scraping the barrel on these lists by about point 6… Still, Angels Share is one of the coolest sailing yachts around. The sleek, black, low-to-the-water profile keeps her looking like a regatta-winning rocket even when she’s sat at anchor. I would say Angels Share would be the perfect yacht to charter for a regatta if you cared just as much about entertaining as winning- just look at all that deck space!

Yep, welcome to every karaoke bar in Manchester on a Friday night. No yacht could ever have been named after this. Let’s move on. 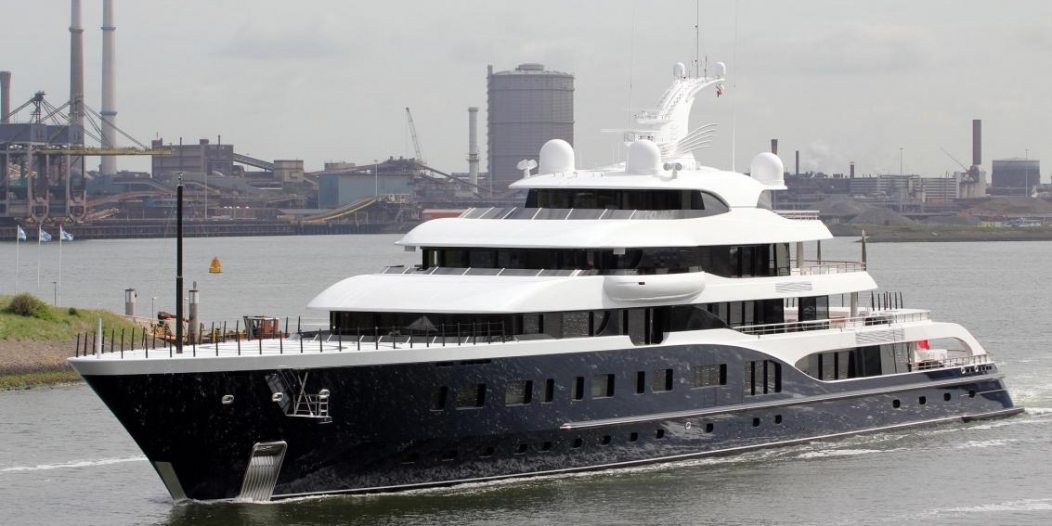 You may also wonder whether serial Feadship owner Benedict Arnaud was a fan of alt-rock band The Verve- I wouldn’t be surprised if vocalist Richard Ashcroft had his own collection of Louis Vuitton luggage to take on tour with him… Either way, Symphony is an absolutely gorgeous yacht, and currently is the largest Feadship afloat (but for how long, I wonder?). The Verve, meanwhile, released their seminal single Bitter Sweet Symphony in 1997. Famously, and controversially, it was based upon some pretty sketchy parts of a copyrighted Rolling Stones number- which explains why you’ll find Mick Jagger and Keith Richards in the credits.

This one is completely unrelated, and I’m not ashamed to admit it. The chance of Roman Abramovic (a Russian Oligarch/Billionaire) naming his mega-super-giga-yacht Eclipse after a song by Bonnie Tyler (a Welsh songstress born into a coal mining family, with a penchant for 80s glamor) is quite probably zero. Still, they’re both giants in their own ways; Eclipse was once the world’s largest yacht, whilst Total Eclipse of the Heart reached #1 in many countries and is one of the best selling singles of all time. Bravo both of you?

Can you think of any more superyachts named after songs? If so then tweet us and let us know, or submit them in the comments section at the foot of the page!

Previous articleI spent a morning playing with the Dynamiq yachts configurator and dropped a cool €16.5m Next articleThis is Luxury Made Simple: This is Project Ruya