Famous Superyacht? Aren’t they all? Yes maybe, but some find themselves becoming celebrities in their own right. We take a look at some Superyachts that have enjoyed 15 minutes of fame on-screen. Did you spot them at the cinema?!

What’s a James Bond movie without a Superyacht, right? The first of our Bond boats is Sunseeker’s 32.9m Casino Royale, which appeared in the 2006 film of the same name.
If you fancy re-enacting the scene for yourself, Casino Royale can be chartered in the Western Mediterranean, with weekly rates from €65,000. 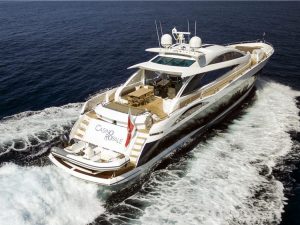 Our second famous Superyacht is another Bond star. Also the only sailing yacht on the casting list, is the beautiful 56m Regina. Built by Pruva Yachting and launched in 2011, this sailing starlet appeared in 2012 ‘Skyfall’ under the pseudonym ‘Chimera’. Regina was sold at the start of January 2019 and has since been renamed.

Another Sunseeker to have made it to the big screen is 40m Thumper. This popular charter yacht appeared in 2016’s ‘Absolutely Fabulous: The Movie’. She played host to Jennifer Saunders and Joanna Lumley as they sipped Champagne off the coast of Cannes. Sweetie, Darling!

Digressing from the cinema screen to the set-top box. Sky Atlantic’s ‘Riviera’ series not only starred Golden Globe nominee Julia Stiles, but also 54m Turquoise AND its owner!  The 54m Superyacht was built by the Turquoise shipyard. Superyacht fans will spot her high-profile owner making a cameo appearance. Right before the famous Superyacht is blown up! (with the help of some CGI…)

Go back to where it all began. All episodes of #Riviera season one available On Demand #SkyAtlantic #JuliaStiles

Number 1 on our list, although arguably already a pretty famous Superyacht, is Lurssen’s 95.2m Kismet. The newest superyacht to enjoy on screen stardom. Featuring in Netflix’s latest good guys vs bad guys blockbuster ‘6 Underground’, alongside Ryan Reynolds. Kismet takes a leading role as the setting for one of the most spectacular shoot-outs in cinematic history. We hope not all the action was filmed on board! Imagine the repair bill!
6 Underground is available to watch on Netflix now, check out the trailer here >
Kismet is available for charter and listed for sale with Moran Yachts.

Congratulations to @michaelbay and cast on the release of 6 UNDERGROUND featuring the 312’ Lurssen KISMET! Be sure to check it out the film on @netflix. She is currently available for sale and charter exclusively through Moran Yacht & Ship. Visit the link in our bio to learn more!⁠ ⁠ #6undergroundmovie #6undergroundpremiere #netflix #michaelbay #netflixoriginals #movies #yachtcharter #yachtsforsale #yachtbroker ⁠#billionaire #kismet #yacht