Many recruitment posts traditionally have stated ‘no-visible tattoos’, but with attitudes towards body art shifting worldwide, is it still true that superyacht crew with tattoos are less likely to find permanent work?

To answer the commonly asked question ‘can you work on a superyacht with tattoos?’, we reached out to tattooed crew members and seasoned recruiters to discover the current stance on body art within the industry. 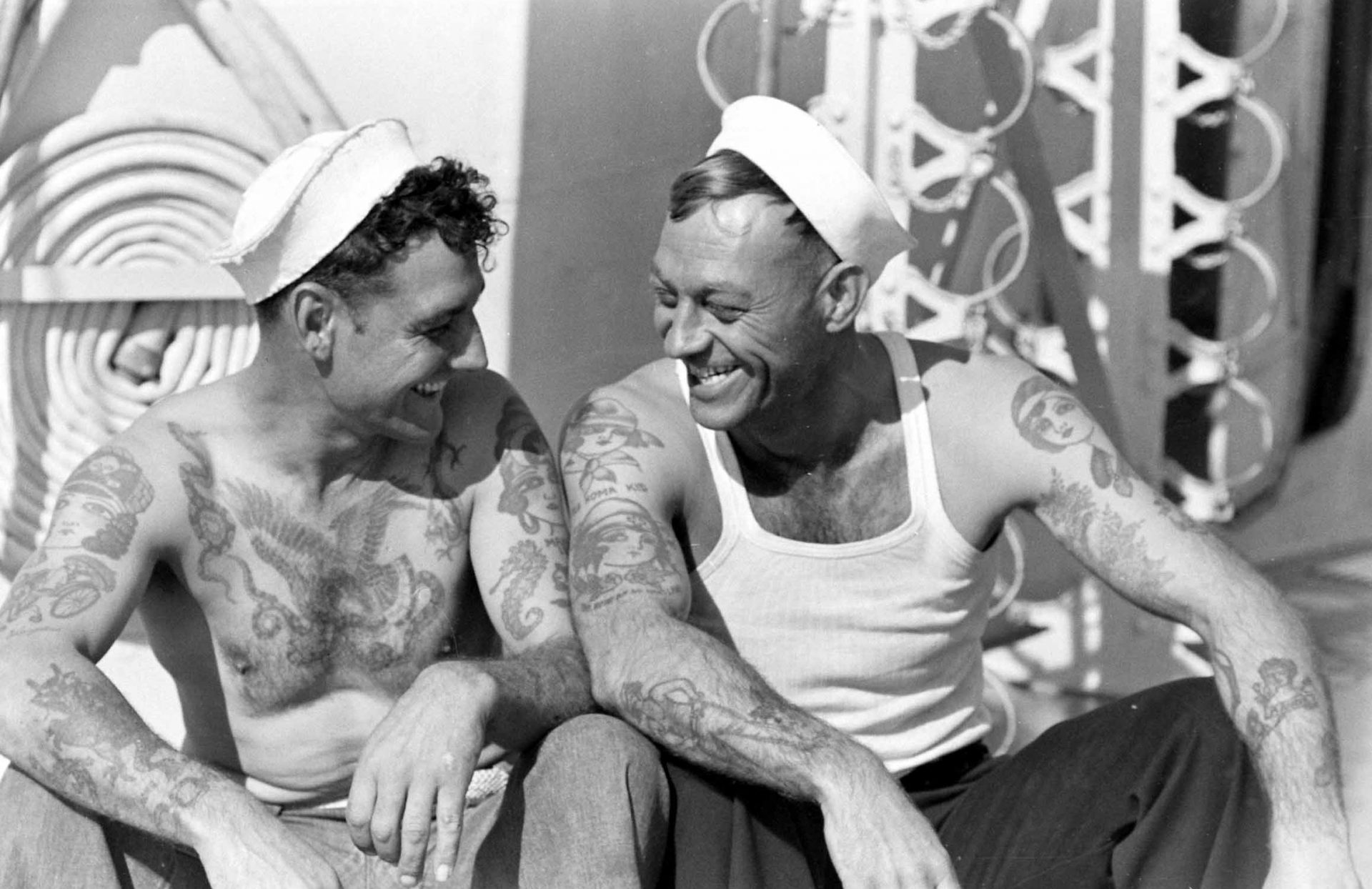 The yachting industry only continues to grow in popularity, with many newcomers flocking to yachting hubs in hopes of landing their first yachting job (Below Deck has a lot to answer for), but what is the likelihood of permanent employment for visibly tattooed hopefuls?

Origin of the sailor tattoo

Seafarer tattoos are believed to have originated in Polynesia and were brought to the West by Captain James Cook in the 1700s. Traditionally, tattoos served as markers of a sailor’s travels, indicating his beliefs, his role aboard the ship and his superstitions.

The tradition of tattooing continued to spread throughout the world’s Navies – bored seafarers would tattoo mementos of their travels to pass the time during long voyages. Other amusing tattoo trends emerged during the Second World War when the inking of a rooster and pig on each foot was popular, it was thought to prevent sailors from drowning. 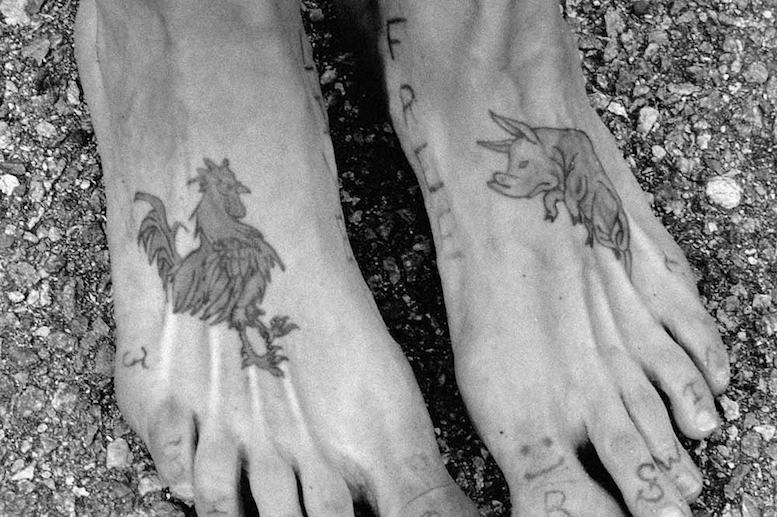 Today, the culture surrounding marine industries has changed and a more ‘professional’ appearance is now considered more important. Perhaps this is especially true when considering the yachting industry, an industry that places a high value on discretion, image, and sleekness.

However, with many crew transitioning from commercial seafaring backgrounds where tattoos are likely to be less of an issue onboard, do tattooed crew struggle to find permanent positions on board private vessels?

“I’m finding that more often than not the experience is the clincher, and a great [crew member] won’t be turned down for an inoffensive tattoo”

Erica Lay started her recruitment career in 2007, working for The Crew Network. She moved on to YCO in 2008 before leaving at the end of 2012 to open her boutique agency EL CREW CO. For those of you who may be questioning ‘can yacht crew have tattoos?’, Lay may have some answers.

Lay has noticed that when it comes to recruiting tattooed crew, it depends largely on the position:
“Over the years I’ve generally had no issues placing engineers and chefs with tattoos, the problem seems to be more prevalent with client-facing roles such as interior and deck roles”

The now managing director of EL CREW CO feels that as general attitudes towards tattoos are changing within society, larger more visible tattoos are becoming more accepted: “Tattoos [were once] reserved for military personnel, gang members, and prisoners. Tattoos have gone from crude basic inkings to works of art that often tell a very personal story”, Lay elaborates.

As for a shift in attitude towards tattoos within the industry, Lay believes that experience is now of higher priority: “For senior positions, I’m finding that more often than not the experience is the clincher, and a great chief stew won’t be turned down for an inoffensive tattoo. Chefs with tattoos aren’t an issue, nor are engineers. I’ve even worked with some sailing yacht owners who expect tattoos on their crew, as in their eyes it demonstrates a ‘real sailor’.” 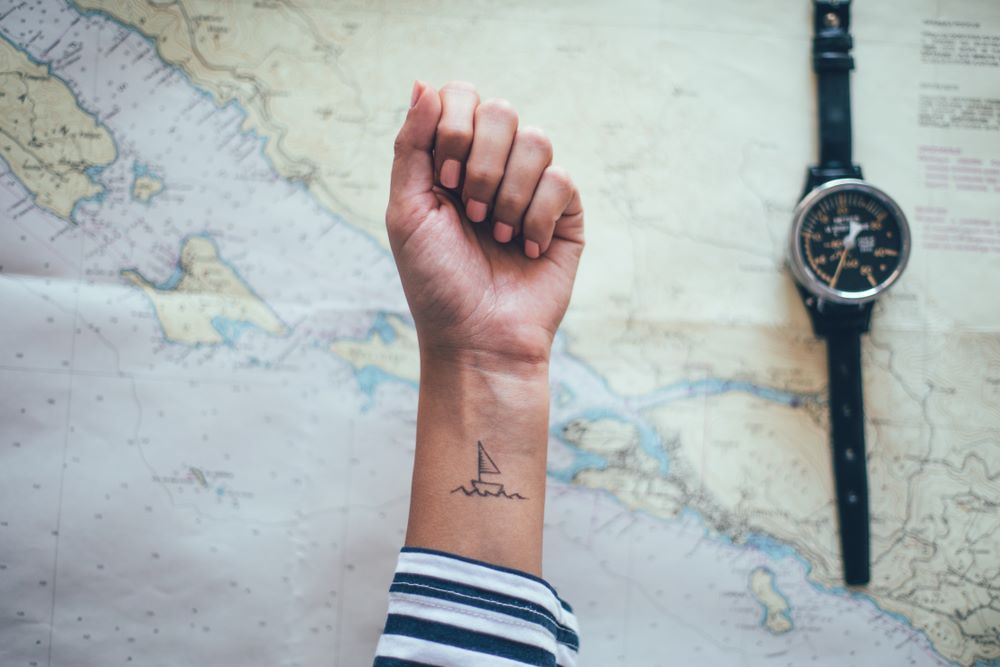 “The attitude has changed, those who did not really ‘like’ [tattoos] in the past have learnt to accept them”

Maria Carnicelli, who has recruited crew for The Crew Network for three years, believes one reason for the ‘no visible tattoo’ request could be because of charter clients: [On charter yachts] the nationality of clients varies, and there is no certainty that they are ok with tattoos. I believe that in this case the no tattoo policy is set in stone just to avoid creating any potential discontent of the client”

Like Lay, Carnicelli does however believe that due to the shifting worldwide acceptability of visible tattoos, the yachting industry is following suit:

“People with tattoos used to be compared to non-serious people, or people with bad habits. Now that at least 60% of the worldwide population has at least one tattoo. The attitude has changed and those who in the past did not really ‘like’ tattoos have learnt to accept them. As usual, this is something that relies on the culture and the age of the Owner.”

“At no point have I been affected by the fact I have visible tattoos. Sadly I’m aware this is not the case for all tattooed crew”

Christian Deakin, Chief Officer onboard a 42-metre motor yacht, agrees that there has been a noticeable shift in attitude in recent years: “I remember looking at particular Facebook groups and recruitment websites before I joined the industry, and seeing that at least 50% of the posts said ‘No visible tattoos’, and thinking perhaps this is an industry I won’t be able to become a part of”.

Whilst Deakin believes he has been fortunate that his tattoos have not prevented him from finding work, he understands this may not always be the case: “I have done quite well at working my way up the ladder and at no point have I been affected by the fact I have visible tattoos. Sadly I’m aware this is not the case for all tattooed crew” 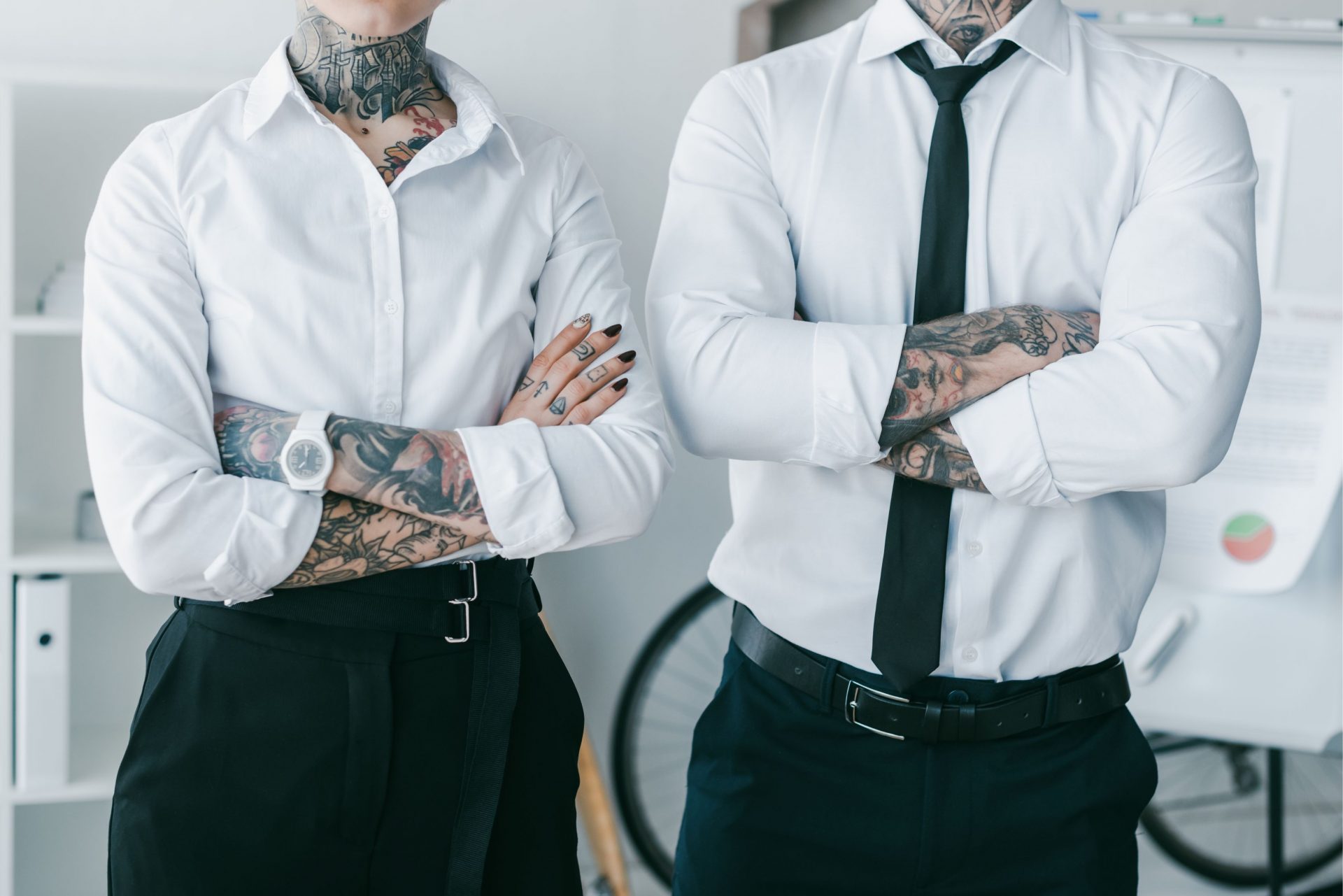 Most seem to agree that for heavily tattooed folk, it has historically been a case of ‘finding the right boat’, with owners that are perhaps more open-minded. Perhaps then, it is the introduction of a new generation of yacht-owner that is set to be the catalyst for a change in attitude. Deakin echoes this: “In my opinion times have changed, the mentality has changed worldwide not just in yachting. now everywhere you look you see people with tattoos. A lot of the new generation yacht owners have tattoos, so they are unlikely to say that their crew shouldn’t have them”.

Alexandra Post, who has worked on her current vessel for the last two years, explains how she had repeatedly been turned down by boats due to tattoos: “I had many interviews with promising outcomes, only to have opportunities fall through as a result of my visible tattoos. I went through emotional rollercoasters continuously and ended up working in a bar close to a marina. I befriended a local, only later to learn that he was a yacht captain. He eventually hired me and gave me a chance to prove my work ethic”

Post suggests that the yachting industry may not have previously accepted tattoos due to the concept of ‘purity’: “ I think people’s opinion, in terms of upper-class industries, is that of ‘purity’. People with tattoos are often judged immediately based on their visible ink”.

But Post, now happily employed, also agrees that perhaps attitudes are changing and that perhaps now the onus is rightly on work ethic, and the individual approach of each crew member: “If crew with visible tattoos work just as hard as those that don’t, and can be respectful and presentable, attitudes will change. I believe all people can contribute to the industry, visible tattoos or not”

In air travel, it appears that body art is already becoming less of an issue for cabin crew. A recent article by Globe Trender revealed that: 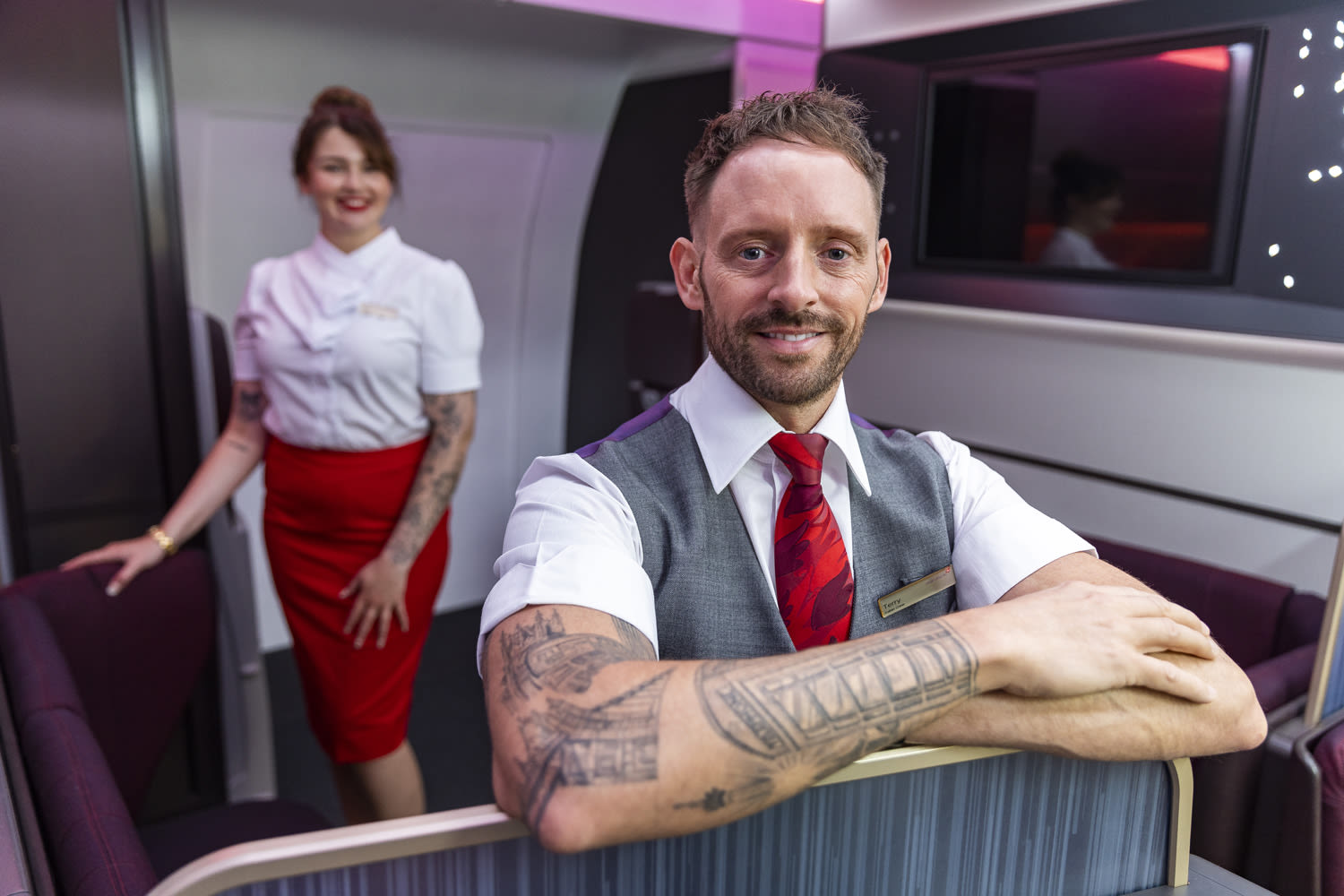 Perhaps the yachting industry is not so far behind. The influx of a new generation of yacht owners may bring with it an overhaul of old ideals of what is deemed acceptable within the industry.