The future of the bridge: how far are we from autonomous yachts?

Home The Crew Mess Departments Deck The future of the bridge: how far are we from autonomous yachts?

From Alexa to Siri, Artificial Intelligence (AI) is already infiltrating our everyday lives without us noticing. Every day there is an ever-increasing innovation in new technologies trying to improve and make our lives easier. We are seeing the rise in popularity of autonomous cars, from driver assist and lane drift warnings, to near-to self-driving – in the latest Tesla models. So, what about the future of the bridge? Will we switch out our human Captains to robotics and AI? Will owners want their expensive pride and joy to pick them up without human intervention? 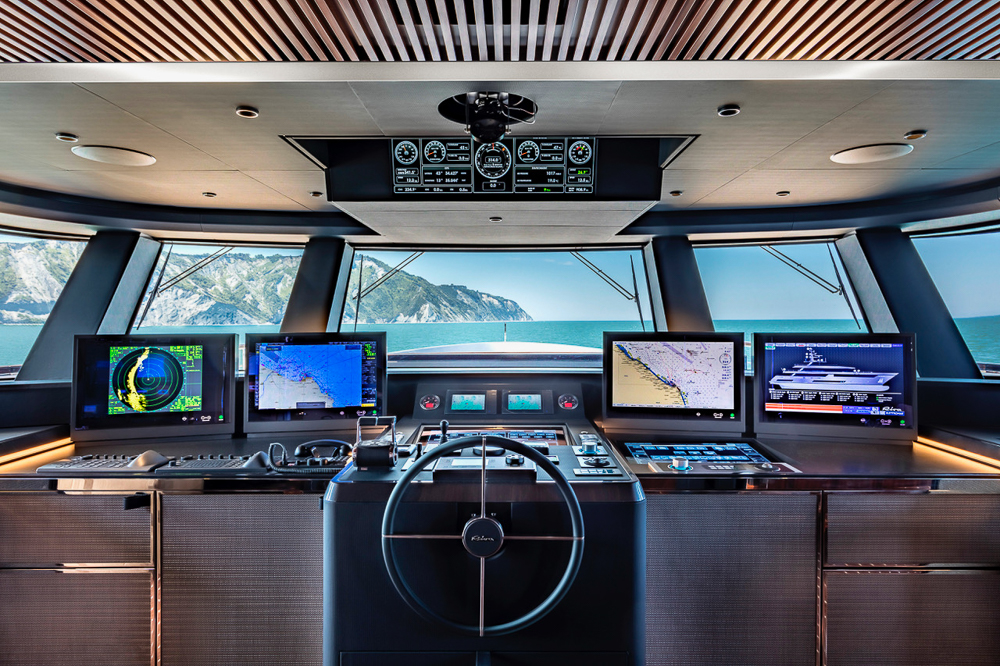 Taking over the helm

There are a few recent examples of autonomy in the Marine sector. This June, the Mayflower Autonomous Ship (MAS), a 50ft solar-powered trimaran, completed a 3,500 miles unmanned trip from Plymouth, UK to Halifax, Nova Scotia. The project is led by ProMare, a US non-profit, and IBM; they have already carried out various autonomy-based scientific experiments. However, this vessel’s other mission is long-term sea exploration, gathering ocean data as a more cost-effective alternative to crewed vessels.

On a larger scale, the Hyundai subsidiary, Avikus has also recently conducted a successful transatlantic voyage in collaboration with SK shipping. The large merchant vessel called Prism Courage used level 2 autonomous navigation technology to cross from the Gulf of Mexico to South Korea in 33 days. As agreed by the IMO, level 2 autonomous technology means crew members are still onboard in case of emergency, up to level 4, which is movement without any human interaction.

Whilst this level of autonomy hasn’t yet reached the superyacht industry, these examples and successful voyages are catalysts for the future of the bridge and further advancement in developing maritime autonomy. Various Superyacht players are showing a keen interest in pioneering autonomous yachts, including shipyard Mengi-Yay.

The role of AI has been quietly gaining pace in the industry for the last few years, reflected in various design concepts. The yacht design studio of Max Zhivov has created the 26m Drakkar S, a smart yacht concept controlled by AI without a Captain, able to identify surface and underwater obstacles. The idea is a solution for yacht charters with short journeys of 1-4 days, with guests controlling all aspects of the yacht via a smartphone app.

DLBA naval architects have created a 58m autonomous concept, Tempo. Jefferey Bowles, the Director at DLBA, explains, “we are currently working on autonomy in two domains directly applicable to yachts, maneuver autonomy and self-adaptive health monitoring (SAHM).” The team at DLBA “recently concluded our effort with DARPA on the No Manning Required Ship (NOMARS) program to maximise vessel reliability through SAHM. The program concluded with the preliminary design of a Hull, Mechanical, and Electrical systems (HM&E) autonomous system to provide fault detection, fault prognosis, and plant reconfiguration. We are currently conducting laboratory testing to validate our solution.”

At Feadship, the Pure concept is the best example of the potential benefits of autonomous developments. Technology such as their polestar system, as described by the head of R&D at Feadship, Giedo Loeff, will “enable (in part) further automation of engineering tasks and remote engineering.” The Pure concept is based on how a yacht can be rearranged by implementing more autonomous features. Loeff discusses that “technology-wise, a lot is already possible. We have tested automated navigation systems and situation awareness systems using augmented reality. These systems will become part of bridge systems in the near future.”

But why the need to design autonomous yachts? What are the benefits? The drive to move the industry towards a sustainable future is vast. Research has shown that autonomous vessels tend to have a smaller carbon footprint than crewed vessels, optimising fuel and the health and automatic maintenance and tracking of the onboard systems.

Other potential benefits surround the economics of running the vessels; this can especially be seen within shipping. Making the vessel autonomous has been shown to reduce crewing costs. This is also reflected in the navigational aspect; AI can enable the vessel to take the most economically best route, reducing fuel and equipment usage.

As well as the environmental considerations, there are also safety considerations. Through autonomy, the human error resulting in accidents can be eliminated with more efficient navigation and reduced risks of collision and grounding. However, on the flip side to the increase in safety, there is the increased issue of cybersecurity flaws whereby communication channels need to be 100% protected with tight cybersecurity plans to remove the risk of potential intrusions to the vessel. The IMO states that all vessels over 500GT need a workable cybersecurity plan.

There are also beneficial design aspects when it comes to autonomy. Loeff explains that the benefits of an autonomous superyacht are very “personal” and “all owners would benefit from more space and flexibility in design.” However, he further explains that a fully autonomous superyacht “would require a new sort of client, but the next generation will have very different expectations and acceptions.”

Who is in charge?

However suitable the benefits may sound, autonomy in the oceans has various obstacles to overcome, such as legal and regulatory hurdles.

The legal practicalities are hazy; maritime law is not yet prepared for the arrival of full autonomy, with issues such as unpredictable outcomes and liability concerns. Any autonomous vessel accident will bring a huge wave of legal, liability and insurance complexities. Losing an unmanned vessel to an autonomous accident or mistake is one thing but losing an unmanned vessel carrying humans is another. Insuring these vessels is complex; a new level of thinking and mindset shift would need to come.

Whilst examples of autonomous vessels are already in play, particularly within shipping, is the superyacht industry ready in the same way? The human element in the superyacht industry is crucial; it is an industry reliant on unparalleled service by humans. Owners and guests trust the Captain and crew to make their time onboard safe and enjoyable. Will this relate to robotics and technology in the same way? Possibly not.

The future may see a Captain’s role change onboard. Instead of physically driving and parking the yacht, a Captain may be trained to oversee and override the AI tech. Bowles at DLBA believes that “we need chefs, stews, and deckhands to provide attention and enjoyment to passengers. The captain and engineering team, on the other hand, I think could be eliminated one day.” He explains that “the deckhand could be crossed-trained in the deck and engine department and would be able to sort details the AI could not.” Whichever new crewing situation unfolds in the future, it will likely require re-training and qualifications.

Whilst there has been a lot of research, investment, and trialing within maritime autonomy, the field is still new. There is still some scepticism and lack of confidence surrounding the technology. Not only this but the issue of cost, implementing autonomous technology is expensive, and shipyards and owners need to have complete confidence before investing. Bowles states, “going autonomous is like going green at this stage in its maturity; it requires a commitment and a healthy chequebook and doesn’t always result in a return of investment. That will eliminate 95% of the potential embracers of the technology.”

Benefits can be seen in shipping, but there is still a sizeable gap regarding Superyachts. A human is still very much a valuable element of a Superyacht. Similar to the IMO autonomy levels, we may see versions and levels of varying autonomy gain pace in the future.

Previous articleMgmt’s shoreside purser service is saving Captains thousands Next article9 tips on how to relax, rest & recharge at the end of the season