West Nautical, in partnership with Kate Gillespie and the South Shields Marine School, hosted a Covid-19 safe bespoke “Command and Control” course to a team of 9 delegates from the same new build Motor Yacht. The delegates consisted of a 3-person engineering team and a 6-person bridge team made up of 2 captains, 2 chief officers, and 2 OOW’s.

Utilising South Shields Marine School’s 360-degree bridge simulator and two-story full mission engine simulator. The emergency scenarios were based on a virtual vessel with representative equipment to replicate that which will be found on board the delegates vessel. The bridge and engine simulators can operate independently or be connected in order to run emergency scenario training as it would be on board a vessel. The West Nautical team utilised both options during the course.

This was a fully customised course commissioned to West Nautical by Captain Stuart Frize. He had attended the Command and Control course previously, for the officers of his vessel which is due to be delivered in the Spring.

Captain Frize said –  “The West Nautical Command and Control course is unique amongst simulator courses that I have attended. In 3-days we are able to break down, build, and fine-tune our emergency procedures and abilities. The post drill debriefs involving video, voice, and data analysis are crucial for Officers and Engineers to gain a new perspective on their strengths and flaws. The immediate lessons learned and improvement to their confidence and abilities are remarkable. I highly recommend this course to other new build and Operational Captains.” 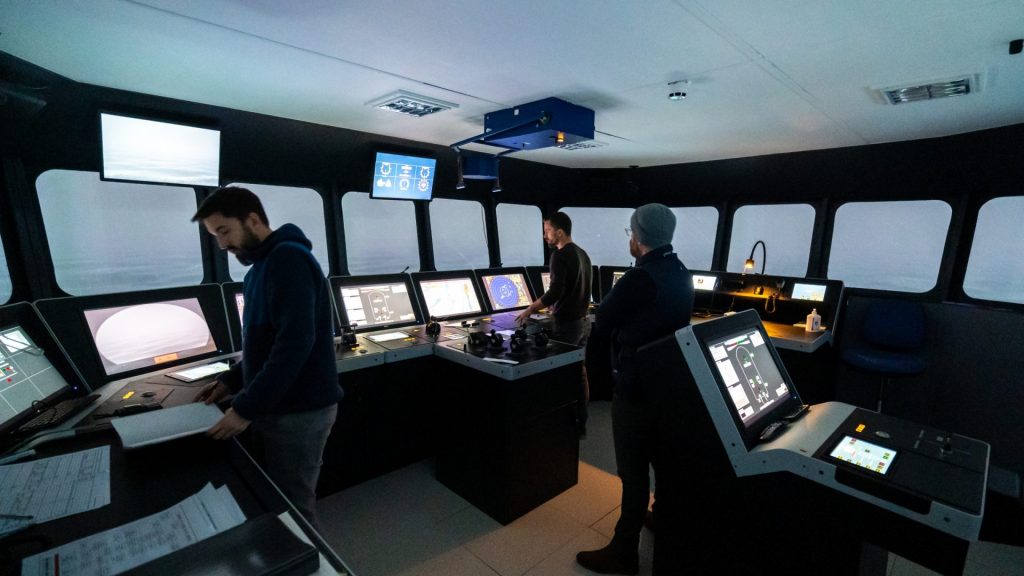 Training can go ahead despite Covid

This course goes to show that even during the global crisis of the coronavirus pandemic, some employers and shipping companies continue to invest in training their seafarers. West Nautical and the South Shields Marine School were delighted to deliver this bespoke course following the strict protocols to ensure all personnel involved were safe.

Over the 3-days, the delegates were put through a wide range of scenarios. The aim was to improve emergency responses, communication, and resource management, as well as implement their new ISM systems which are still in their development stages. These scenarios were designed by West Nautical in order to provide invaluable training in a realistic environment. Scenarios included collision, fire, flooding, abandon ship, medical emergencies, piracy, equipment, and engine failure. All whilst “navigating” in very busy shipping lanes such as the English Channel, Singapore, and Kattegat Straits.

The delegates varied in experience. Some of them had not been at sea for over 18-months as they had been in the shipyard overseeing the new build. Not having worked together previously, the course gave the officers the opportunity to build relationships in the most stressful of environments.

After each exercise was completed, the delegates gather in a classroom for a detailed debrief. This included video playbacks of the scenario and step-by-step analysis of actions taken which either improved or heightened the scenario. Geoff Moore, West Nautical managing director said:

“After running similar courses to this over the past 6 years, we realise that the real learning is done in the debrief, not during the exercises. We have seen time and again the huge improvements in human response and behavior from delegates after we openly discuss what went wrong, what went well, and what they learned whilst alongside their peers”.

For further information about the West Nautical bespoke training Command and Control course or to sign up for the next course contact training@westnautical.com

Ex yacht captain and seasoned Superyacht industry expert with over 25 years experience including sea time and Yacht management. The Fleet Captain has a background in marketing and management prior to yachting. Get in touch if you would like him to publish your story. hello@superyachtcontent.com