Yachting Gives Back – an interview with founder, Nick Entwisle.

Christmas 2018, Nick Entwisle was sitting at his desk looking down at a jam-packed STP. Hundreds of millions of euros-worth of megayachts were lined up – Palma’s biggest shipyard had never been so full. “Surely they must have a few packets of rice, pasta or beans that they could spare?” he thought to himself. And the first seed was sown for Yachting Gives Back.

“After 22 years with Pinmar, I was looking ahead to my retirement from GYG plc,” explains Nick. “I had plans to tour Europe’s opera houses in the winters and watch Yorkshire playing county cricket in the summers, but also wanted to stay connected to the yachting community and try to make myself useful. I wondered if it was possible to replicate the supermarket model – popping a little extra in the trolley for charity – for superyachts. But was there even a demand for it in a wealthy island such as Mallorca?

“Some desk-based research revealed that Mallorca’s centralised food bank – Banco de Alimentos – helped over 21,000 people in 2018, handing out more than 1.4 million kilograms of food via 82 collaborating organisations. While latest figures from the Balearic branch of the European Anti Poverty Network quoted 18% of the Islands’ population, more than 200,000 people, at risk of social exclusion, and 11,000 surviving on less than 370 euros each month. There was definitely a demand.

“To help me further navigate the maze, I called on Suzie Black, founder of youth empowerment charity Fundación Shambhala. She’d delivered an inspiring speech at one of our annual Pinmar Golf Tournaments and, having taught her youngsters to give as well as receive, had a list of suitable food charities for me to consider. I decided to focus my efforts on Asociación Tardor, a Palma-based soup kitchen serving 350 hot meals a day, and Mallorca Sense Fam, a food bank that assisted 4,757 families in 2018 – Yachting Give Back was born.

“I persuaded two fellow retirees to join me – nautical safety expert Paddy Pigden and technical advisor for Akzo Nobel paints Dennis Moshofsky – and we made tentative steps towards an Easter 2019 ‘food raising’ campaign. Support secured from Pinmar Supply and Deli Delicioso, we dished out flyers and ploughed through our extensive industry contacts to collect a respectable 650kg of food. As the yachts departed for summer season, we assumed our little venture would fall quiet. It didn’t.

“Louise Balfour responded to my interview on Radio One Mallorca and took over our social media. The floodgates opened. Crew are almost always happy to be photographed alongside their yacht and Facebook goes wild. A post featuring a human chain passing 25 bags of food from 96 metre Palladium down to two waiting cars reached 26,500 people. We’d be handing out flyers until the end of time to match that level of awareness. 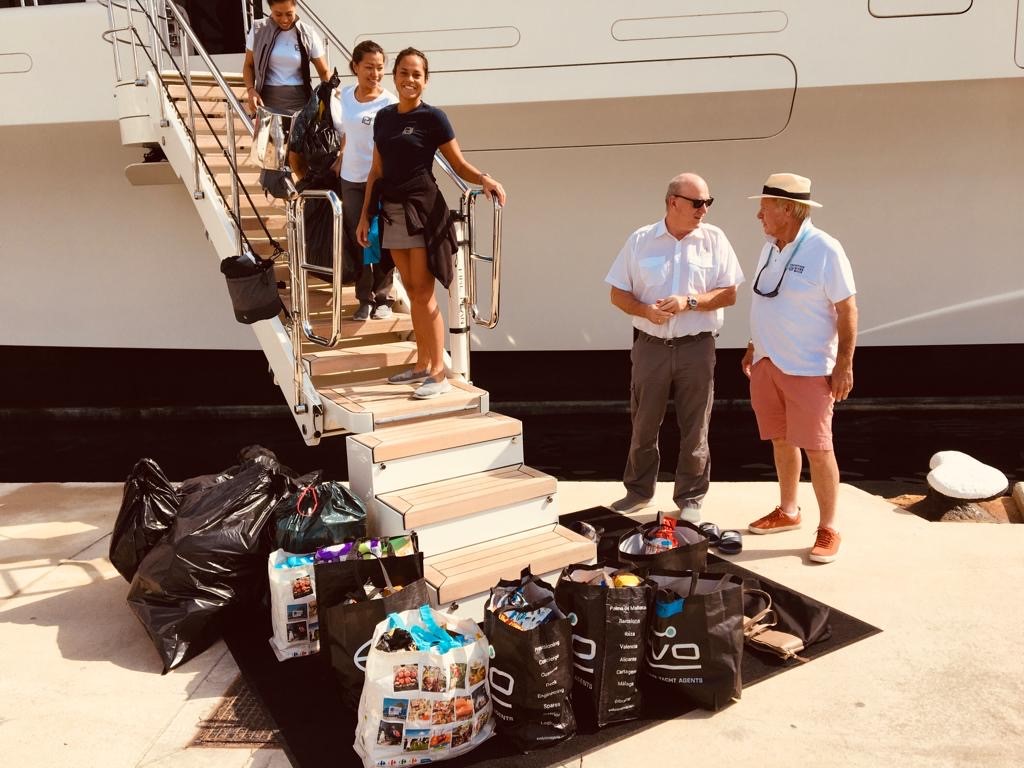 25 bags of food from 96m Palladium

“And then, in August, Simon Relph from The Islander Magazine mentioned Yachting Gives Back to the TP52 Super Series competing in Puerto Portals. Not only did they donate leftover Deli Delicioso lunches to be served at Asociación Tardor, their media team also made an 80 second video of this fight against food waste. It was a massive profile booster and led to the Oyster Palma Regatta doing the same in October. Sunsail and The Moorings have since offered to donate all surplus food at the end of each and every weekly charter next year. Summers no longer look so quiet.

“Yachting Gives Back is now so much more than a seasonal ‘food raising’ campaign. Superyachts are offering us lightly worn crew uniforms, bedding, towels, bric-a-brac, and the answer is ‘yes’ to everything. Mallorca Sense Fam has a conventional charity shop with proceeds converted to more food for its food bank. Unsurprisingly, our superyacht-quality knick-knacks sell fast. Other potential donors have asked us directly what we need and kindly gone shopping for sleeping bags, gloves, socks and scarves to help the Island’s 200 or so homeless get through winter. 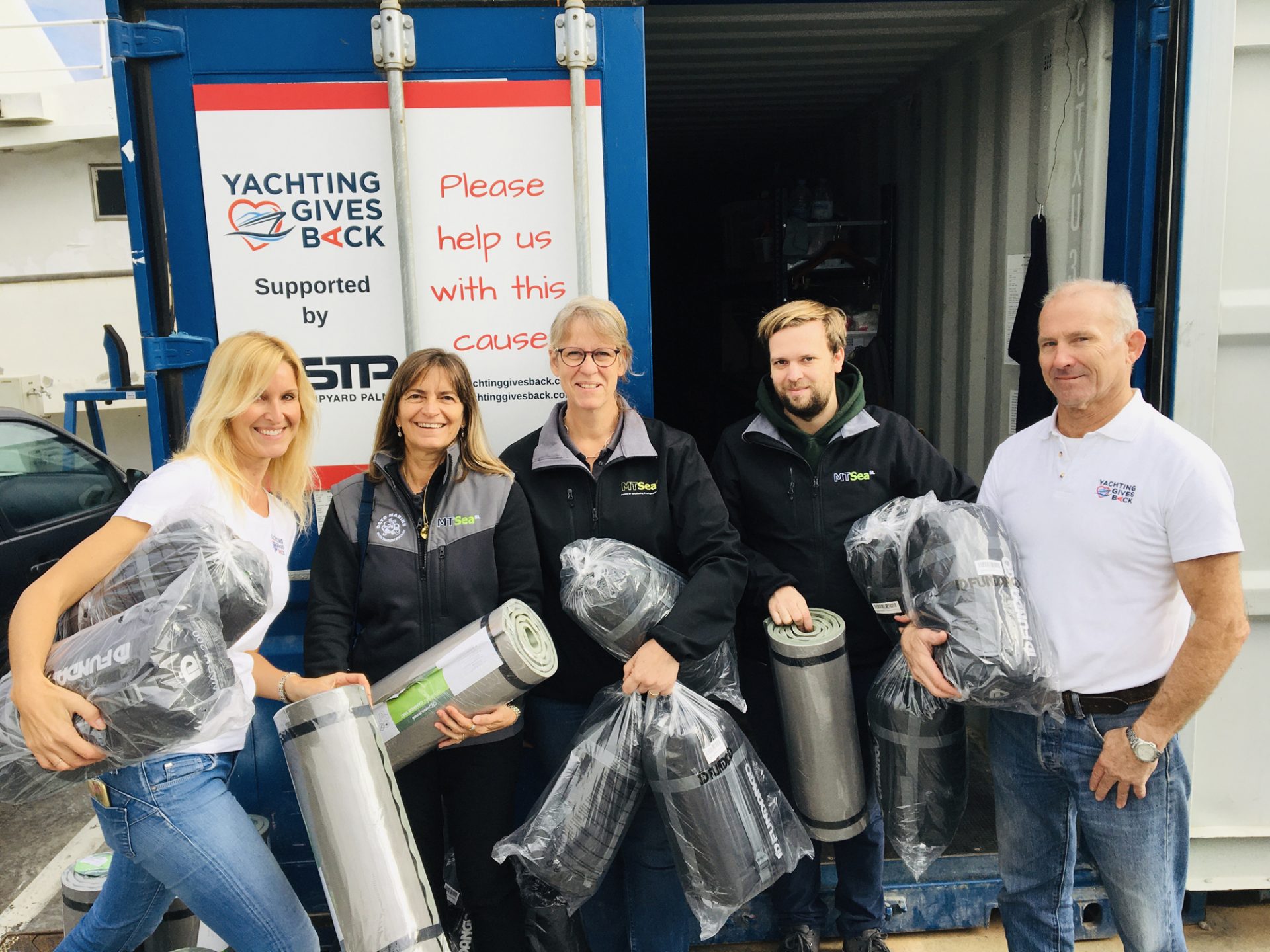 “On the subject of homeless, Asociación Tardor has identified premises for a shelter and needs mattresses and bedding for 45 people. Thanks to the start of refit season, and the kind collaboration of several yachts, as well as Bob the Bed and Darrmar Storage, we already have around 40 mattresses and piles of seriously good quality towels and sheets. Often yacht linen is replaced after just one season, and is carefully looked after by professional crew, so it should have years of life left in it. If you must face the tragedy of homelessness, why shouldn’t you sleep on Egyptian cotton sheets?

“At first, I don’t think Asociación Tardor and Mallorca Sense Fam quite knew what to make of us, since a lot of the stuff we collect can be a bit random. However, I think they now realise that it tends to be superyacht quality. I was delighted recently when we delivered a nearly-new top-notch jamón slicer to Asociación Tardor Head Chef Gabriel, who gave a big smile and said ‘eso es un diez’. I am also told that even our miscellaneous foodstuffs, such as exotic tins of fruit or jars of preserves, go down a storm at Mallorca Sense Fam. 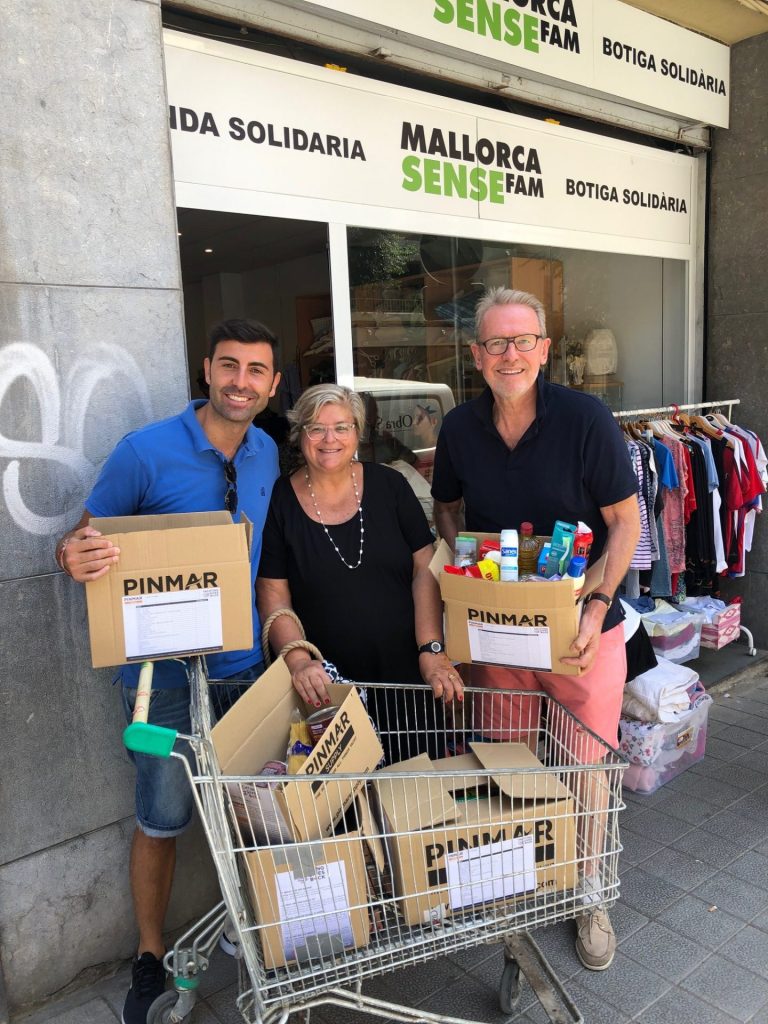 “My retirement hasn’t exactly been leisurely. It still involves waking up early to a packed diary, but it’s wonderful being busy without pressure or stress. It’s also thoroughly enjoyable working with such a lovely team of volunteers. Since STP donated a storage container as a drop-off, sorting and distribution point, we’re now closer to the boats, more visible, and receiving many more donations. We also have a revolving door of between-work yachties, who are keen to help out at the container – usually with a flyer in one hand and a CV in the other.

“The yachting industry represents the epitome of luxury and owners and crew are very aware of that fact and want to give back. I think we’ve captured a moment and we all feel honoured to help this beautiful island community we call home.”

Previous articleWorld Superyacht Awards: USPs Of 5 Of Our Favourite Winners Next articleAs seen on screen – 5 superyachts made famous by the movies